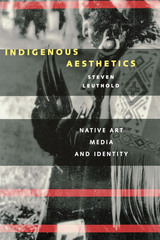 What happens when a Native or indigenous person turns a video camera on his or her own culture? Are the resulting images different from what a Westernized filmmaker would create, and, if so, in what ways? How does the use of a non-Native art-making medium, specifically video or film, affect the aesthetics of the Native culture? These are some of the questions that underlie this rich study of Native American aesthetics, art, media, and identity. Steven Leuthold opens with a theoretically informed discussion of the core concepts of aesthetics and indigenous culture and then turns to detailed examination of the work of American Indian documentary filmmakers, including George Burdeau and Victor Masayesva, Jr. He shows how Native filmmaking incorporates traditional concepts such as the connection to place, to the sacred, and to the cycles of nature. While these concepts now find expression through Westernized media, they also maintain continuity with earlier aesthetic productions. In this way, Native filmmaking serves to create and preserve a sense of identity for indigenous people.
TABLE OF CONTENTS