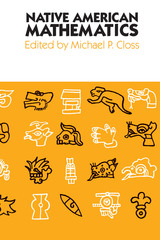 There is no question that native cultures in the New World exhibit many forms of mathematical development. This Native American mathematics can best be described by considering the nature of the concepts found in a variety of individual New World cultures. Unlike modern mathematics in which numbers and concepts are expressed in a universal mathematical notation, the numbers and concepts found in native cultures occur and are expressed in many distinctive ways. Native American Mathematics, edited by Michael P. Closs, is the first book to focus on mathematical development indigenous to the New World.

Spanning time from the prehistoric to the present, the thirteen essays in this volume attest to the variety of mathematical development present in the Americas. The data are drawn from cultures as diverse as the Ojibway, the Inuit (Eskimo), and the Nootka in the north; the Chumash of Southern California; the Aztec and the Maya in Mesoamerica; and the Inca and Jibaro of South America. Among the strengths of this collection are this diversity and the multidisciplinary approaches employed to extract different kinds of information. The distinguished contributors include mathematicians, linguists, psychologists, anthropologists, and archaeologists.

AUTHOR BIOGRAPHY
Michael P. Closs is Professor of Mathematics at the University of Ottawa.
REVIEWS
Of interest to a wide audience, not just students of mathematics and its history, and is highly recommended for personal reading and general library acquisition.
— Historia Mathematica