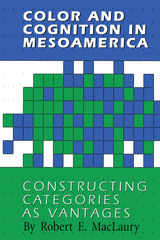 More than 100 indigenous languages are spoken in Mexico and Central America. Each language partitions the color spectrum according to a pattern that is unique in some way. But every local system of color categories also shares characteristics with the systems of other Mesoamerican languages and of languages elsewhere in the world.

This book presents the results of the Mesoamerican Color Survey, which Robert E. MacLaury conducted in 1978-1981. Drawn from interviews with 900 speakers of some 116 Mesoamerican languages, the book provides a sweeping overview of the organization and semantics of color categorization in modern Mesoamerica.

Extensive analysis and MacLaury's use of vantage theory reveal complex and often surprising interrelationships among the ways languages categorize colors. His findings offer valuable cross-cultural data for all students of Mesoamerica. They will also be of interest to all linguists and cognitive scientists working on theories of categorization more generally.

AUTHOR BIOGRAPHY
The late Robert E. MacLaury held a Ph.D. in cognitive anthropology from the University of California at Berkeley.
REVIEWS
An important contribution to the study of color classification and to cognitive studies in general.... This is a work which all researchers will refer to and consult and which will enter into all anthropological discussions about color classification.
— Per Hage, Associate Professor of Anthropology, University of Utah