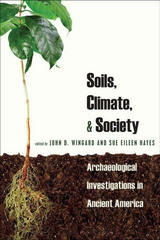 Much recent archaeological research focuses on social forces as the impetus for cultural change. Soils, Climate and Society, however, focuses on the complex relationship between human populations and the physical environment, particularly the land--the foundation of agricultural production and, by extension, of agricultural peoples.

The volume traces the origins of agriculture, the transition to agrarian societies, the sociocultural implications of agriculture, agriculture's effects on population, and the theory of carrying capacity, considering the relation of agriculture to the profound social changes that it wrought in the New World. Soil science plays a significant, though varied, role in each case study, and is the common component of each analysis. Soil chemistry is also of particular importance to several of the studies, as it determines the amount of food that can be produced in a particular soil and the effects of occupation or cultivation on that soil, thus having consequences for future cultivators.

Soils, Climate and Society demonstrates that renewed investigation of agricultural production and demography can answer questions about the past, as well as stimulate further research. It will be of interest to scholars of archaeology, historical ecology and geography, and agricultural history.