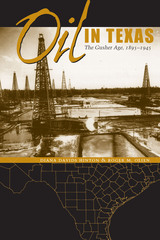 As the twentieth century began, oil in Texas was easy to find, but the quantities were too small to attract industrial capital and production. Then, on January 10, 1901, the Spindletop gusher blew in. Over the next fifty years, oil transformed Texas, creating a booming economy that built cities, attracted out-of-state workers and companies, funded schools and universities, and generated wealth that raised the overall standard of living—even for blue-collar workers. No other twentieth-century development had a more profound effect upon the state.

In this book, Roger M. Olien and Diana Davids Hinton chronicle the explosive growth of the Texas oil industry from the first commercial production at Corsicana in the 1890s through the vital role of Texas oil in World War II. Using both archival records and oral histories, they follow the wildcatters and the gushers as the oil industry spread into almost every region of the state. The authors trace the development of many branches of the petroleum industry—pipelines, refining, petrochemicals, and natural gas. They also explore how overproduction and volatile prices led to increasing regulation and gave broad regulatory powers to the Texas Railroad Commission.

Diana Davids Hinton has a Ph.D. in History from Yale University and holds the J. Conrad Dunagan Chair in Regional and Business History at the University of Texas of the Permian Basin.

Roger M. Olien, who has a Ph.D. in History from Brown University, lives in Austin and is a member of the Texas State Historical Association Speakers Bureau. The authors have written five books and numerous articles on the petroleum industry.

REVIEWS
Comprehensive in its coverage, clearly organized and written, and thoroughly researched, this book fills a significant hole in the historical literature on Texas oil.
— Joe Pratt, Cullen Professor of History and Business, University of Houston