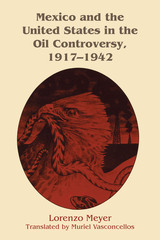 From reviews of the Spanish edition:

“Meyer’s perceptive commentary on Mexican power politics presents new insights into the petroleum lobbies in Mexico City and Washington. With unbiased empathy he shows the validity of Mexico’s complaints about foreigners’ deriving an overabundance of profit from a nonrenewable natural resource. He understands United States history and never abuses his license to criticize.” —Hispanic American Historical Review

“This useful addition to the literature on twentieth-century Mexican–United States diplomatic relations is a scholarly work, worthy of consideration by all students of the subject.”—American Historical Review

Mexico and the United States in the Oil Controversy, 1917–1942 explores the relationship between the United States and Mexico during the first half of the twentieth century, with special attention to the Mexican nationalization of the oil industry. Relying on Mexican archival material never before analyzed, the author presents a unique perspective on the period following the Mexican Revolution and Mexico’s efforts to diminish its economic dependency on the United States. This work not only describes the political and economic struggle between the Mexican government and the U.S. oil companies but also serves to illustrate in general the nature of dependency between Latin American countries and the United States. It will be of interest not only to Mexican specialists but also to diplomatic and economic historians.

AUTHOR BIOGRAPHY
Lorenzo Meyer is Professor Emeritus of International Relations at El Colegio de México. He was winner of Mexico’s National Prize in the Social Sciences, 1975, for his achievements as a political scientist.
REVIEWS
Meyer presents a clear and detailed description of this complex topic.... It will be a valuable addition for serious scholars involved in the study of 20th-century Mexico or the problems relating to multinational corporations and their operations in developing countries.
— Choice