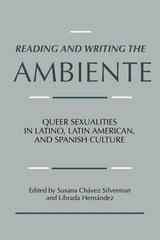 In this dynamic collection of essays, many leading literary scholars trace gay and lesbian themes in Latin American, Hispanic, and U.S. Latino literary and cultural texts. Reading and Writing the Ambiente is consciously ambitious and far-ranging, historically as well as geographically. It includes discussions of texts from as early as the seventeenth century to writings of the late twentieth century.
Reading and Writing the Ambiente also underscores the ways in which lesbian and gay self-representation in Hispanic texts differs from representations in Anglo-American texts. The contributors demonstrate that—unlike the emphasis on the individual in Anglo- American sexual identity—Latino, Spanish, and Latin American sexual identity is produced in the surrounding culture and community, in the ambiente. As one of the first collections of its kind, Reading and Writing the Ambiente is expressive of the next wave of gay Hispanic and Latin scholarship.

Susana Chávez-Silverman is professor of romance languages and literatures at Pomona College in California. She is coeditor of Tropicalizations: Trans-cultural Representations of Latinidad and author of Scenes from la Cuenca de Los Angeles y otros Natural Disasters and Killer Crónicas. Librada Hernández is assistant professor of Spanish at Los Angeles Valley College in California.

"North American and European queers have assigned themselves the roles of 'universal' queer subjects. Reading and Writing the Ambiente insightfully challenges that bias. This volume joins and significantly contributes to an emergent wave of queer critique that is calibrated to look beyond the borders that queer theory has set up for itself."—José Esteban Muñoz, author of Disidentifications: Queers of Color and the Performance of Politics


"Reading and Writing the Ambiente will be of interest to scholars of Spanish, Latin American, and Latino literatures and cultural studies, as well as to scholars in queer studies beyond the geographical and linguistic boundaries of Hispanism."—Amy Kaminsky, University of Minnesota