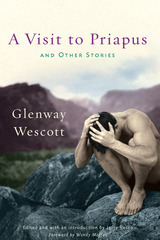 Just as E. M. Forster's novel of gay love, Maurice, remained unpublished throughout his lifetime, Glenway Wescott's long story "A Visit to Priapus" was also destined to be a posthumous work, buried from 1938 until this century in Wescott's massive archive of manuscripts, journals, notebooks, and letters.
The autobiographical story is about a literary man, frustrated in love, who puts aside his pride and makes a date with a young artist in Maine. Lavishly rendered in Wescott's elegant prose, the tale is explicit where it needs to be, but—as is typical of Wescott—it is filled with descriptive beauty and introspective lessons about sex and sexuality, love and creativity.
Previously published in anthology form in the United Kingdom, "A Visit to Priapus" is presented for the first time in book form in America, containing previously uncollected stories, including three never before published. The result is a candid portrayal of the gifted but enigmatic writer who was famous in youth and remained a perceptive and compassionate voice throughout his long life. Drawn together from midcentury literary journals and magazines of the 1920s and 1930s, as well as from Wescott's papers, the stories were inspired by his life, from childhood to old age, from Wisconsin farm country to New York, London, Germany, and Paris.

Finalist, Gay General Fiction, Lambda Literary Awards
AUTHOR BIOGRAPHY
Glenway Wescott (1901–87) is well remembered for his Midwest novels, The Apple of the Eye and The Grandmothers, as well as his story collection Goodbye, Wisconsin. He is the author of the classic short novel The Pilgrim Hawk and of the World War II bestseller Apartment in Athens, in addition to two volumes of essays and two volumes of journals. Jerry Rosco is the author of the biography Glenway Westcott Personally and the editor of A Heaven of Words: Last Journals, 1956–1984, both published by the University of Wisconsin Press. He lives in New York City.
TABLE OF CONTENTS


Foreword by Wendy Moffat
Acknowledgments
Introduction
Adolescence
Mr. Auerbach in Paris
The Babe's Bed
A Visit to Priapus
The Stallions: Pages from an Unfinished Story
The Frenchman Six Feet Three
The Love of New York
An Example of Suicide
The Odor of Rosemary
Appendix: Two Essays and an Experimental Story
The Valley Submerged
A Call on Colette and Goudeket
Sacre de Printemps