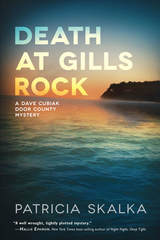 Blame falls to a faulty heater but Cubiak puzzles over details. When one of the widows receives a message claiming the men "got what they deserved," he realizes that there may be more to the deaths than a simple accident.

Investigating, Cubiak discovers that the men's veneer of success and respectability hides an intricate web of lies, betrayal, and treachery.

In a dark, moody tale that spans more than half a century and hopscotches across the peninsula, Cubiak encounters a host of suspects with motives for murder. Amid broken dreams, corruption, and loss, he sorts out the truth.

Death at Gills Rock is the second book in the Dave Cubiak Door County Mystery series.