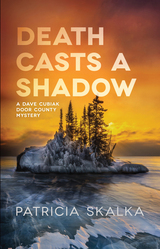 With Door County caught in the grip of a fierce winter storm, Sheriff Dave Cubiak agrees to do a simple favor for a friend of his wife: he stops by to check in on an affluent widow with a questionable new suitor. His initial disquiet is easily dismissed—until she is found dead the next morning in her home. Lying at the bottom of a flight of stairs, clutching a valuable bronze sculpture, she points her outstretched hand in the direction of a nearby, nondescript ring.

The scene bears all the characteristics of an accidental fall, not unheard of for a person of her age, but something is not adding up. Later that week, an explosion in an ice fishing shack on the frozen bay leads to the discovery of another body, burned beyond recognition. Was this the widow’s missing handyman? Could the two deaths be related? With what has become a hallmark for books in the series, past and present collide as Cubiak’s search for answers uncovers the sad legacy of loneliness and the disquieting links between wealth and poverty on the peninsula.
AUTHOR BIOGRAPHY
Patricia Skalka is the author of Death Stalks Door County, Death at Gills Rock, Death in Cold Water, Death Rides the Ferry, Death by the Bay, and Death Washes Ashore, the first six books in the popular Dave Cubiak Door County Mystery series. She divides her time between Milwaukee and Door County, Wisconsin.
REVIEWS
"Set against a northern Wisconsin in winter backdrop, Death Casts A Shadow by Wisconsin novelist Patricia Skalka will be of special interest to readers with an appreciation for the kind of narrative driven storytelling that plays fair in terms of 'whodunnit' plot twists and clues. The stuff of which award-winning movies are made."—Midwest Book Review


“Skalka has a knack for writing even the most minor characters in a way that gets to the core of who they are in just a few words. Plot and characterization, both of which are quite strong in this book, aside, it is the weather and location which truly stand out. Skalka writes in such a powerful manner about the snow storms and biting cold during a Door County's winter, that I felt I needed to put a sweater on even in the heat of the summer as I read the book. She describes the frigid weather so convincingly that I not only could see it in my mind, but I could feel it in my bones. Likewise, her descriptions of the desolate locations, whether in the snow-covered backwoods or the wind-scoured frozen lake, transport the reader. Although this book is the final in this series, I am hopeful that Skalka will find another vehicle for her beautiful writing.”—Sharon Mensing, ReviewingtheEvidence.com