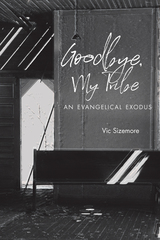 Goodbye, My Tribe: An Evangelical Exodus is Vic Sizemore’s collection of personal essays chronicling two simultaneous transformations. One is the gathering of unconnected—and nonpolitical—evangelical congregations across the nation into the political juggernaut called the Religious Right; the other is the author’s own coming to terms with the emotional and spiritual trauma of his life deep inside fundamentalist Christianity, and his struggle to free himself from its grasp. Sizemore, whose father was a preacher and professor at a small West Virginia Bible college, attended Liberty University in Lynchburg, Virginia, arguably the crucible of American evangelical Christianity.

Sizemore began writing these essays with the aim of exploring and understanding what happened when the mythology of his “tribe” crumbled from beneath his feet. He draws heavily on his upbringing and his family history as a framework for how his “tribe” of white evangelicals have found ways to reconcile Christianity with what the author finds to be troubling stances on many social issues, among them race, gender, sexuality, materialism, anti-intellectualism, and white supremacy.

In a clear-eyed and eloquent voice, Sizemore grapples movingly with his own bewilderment and chagrin as he struggles to reconcile the essential philosophical and moral decay that he believes many evangelicals have come to embrace. His insights, arranged topically and thematically and told through graceful and accessible prose, toggle between memoir and literary journalism, along a spectrum that touches on history, philosophy, theology, and personal reflections.

.
AUTHOR BIOGRAPHY
Vic Sizemore is author of the short story collection I Love You I’m Leaving, and his work has appeared in Story Quarterly, North American Review, Southern Humanities Review, storySouth and many other literary journals. He lives and writes in Lynchburg, Virginia.

Introduction: Truth and My Tribe

The Rumble of Distant Thunder

The Evidence of Things Not Seen

The Holy Fool in Winter

For Flag and Empire

In Mammon We Trust

Suffer Not a Woman

A Life among Guns