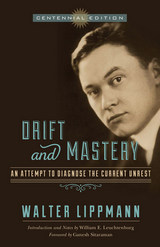 Drift and Mastery: An Attempt to Diagnose the Current Unrest
by Walter Lippmann
introduction by William E. Leuchtenburg
foreword by Ganesh Sitaraman

In 1914, a brilliant young political journalist published a book arguing that the United States had entered a period of “drift”—a lack of control over rapidly changing forces in society. He highlighted the tensions between expansion and consolidation, traditionalism and progressivism, and emotion and rationality. He wrote to convince readers that they could balance these tensions: they could be organized, efficient, and functional without sacrificing impulse, choice, or liberty. Mastery over drift is attainable, Walter Lippmann argued, through diligent attention to facts and making active choices. Democracy, Lippman wrote, is “a use of freedom, an embrace of opportunity.”
Lippman’s Drift and Mastery became one of the most important and influential documents of the Progressive Movement. It remains a valuable text for understanding the political thought of early twentieth-century America and a lucid exploration of timeless themes in American government and politics. Distinguished historian Walter Leuchtenberg’s 1986 introduction and notes are retained in this edition.
Ganesh Sitaraman, who has provided a foreword for this centennial edition, suggests that Lippmann’s classic still has much to say to twenty-first-century progressives. The underlying solutions for our time, he believes, are similar to those of Lippman’s era. Sitaraman contends that American society can regain mastery over drift by reforming finance and reducing inequality, by rethinking the relationship between corporations and workers, and by embracing changes in social life.
AUTHOR BIOGRAPHY
Walter Lippmann (1889–1974) was an American public intellectual, Pulitzer Prize–winning journalist, and widely read columnist on American politics and foreign policy. He cofounded the New Republic magazine, advised several presidents, and notably was the first to popularize the term “cold war,” in his 1947 book The Cold War. William E. Leuchtenburg is the William Rand Kenan Jr. Professor Emeritus of History at the University of North Carolina at Chapel Hill. Ganesh Sitaraman is an assistant professor at Vanderbilt Law School and former policy director and senior counsel to candidate and Senator Elizabeth Warren (D-MA).
TABLE OF CONTENTS