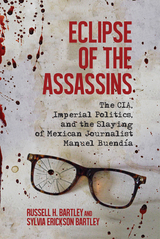 This is a stellar, courageous work of investigative journalism and historical scholarship—grippingly told, meticulously documented, and doggedly pursued over thirty years. Tracking a Cold War confrontation that has compromised the national interests of both Mexico and the United States, Eclipse of the Assassins exposes deadly connections among historical events usually remembered as isolated episodes.
Authors Russell and Sylvia Bartley shed new light on the U.S.-instigated “dirty wars” that ravaged all of Latin America in the 1960s, ’70s, and ’80s and reveal—for the first time—how Mexican officials colluded with Washington in its proxy contra war against the Sandinista government of Nicaragua. They draw together the strands of a clandestine web linking:             Eclipse of the Assassins places a major political crime—the murder of Buendía—in its full historical perspective and shows how the dirty wars of the past are still claiming victims today.

Best books for public & secondary school libraries from university presses, American Library Association
AUTHOR BIOGRAPHY
Russell H. Bartley is a professor emeritus of history at the University of Wisconsin–Milwaukee. He worked as a correspondent for the Mexico City daily newspaper unomásuno from 1980 to 1989. Sylvia Erickson Bartley is a historian, historical records archivist, and photographer. She worked as a photojournalist for unomásuno from 1984 to 1989.
REVIEWS
“A compelling account of the thirty-year investigation by reporters Russell and Sylvia Bartley to unravel two of the most significant political assassinations of the twentieth century—the blatant 1984 slaying of Mexican journalist Manuel Buendía and the brutal 1985 torture-execution of U.S. DEA agent Kiki Camarena. Rather than finger-pointing, arm-waving accusations, the authors use these killings to plunge deep into the clandestine domain created by shipment of CIA guns south through Mexico to the Nicaragua Contras and smuggling of drugs north into the U.S., simultaneously compromising the Mexican state and corrupting U.S.–Mexican relations.”—Alfred W. McCoy, author of Torture and Impunity: The CIA Doctrine of Coercive Interrogation


“These events have been a taboo subject for mainstream media and most academics. Like a Russian novel, Eclipse of the Assassins has a vast cast of characters meshing together in a world where the murder is never perfectly solved but is finally understood.”—Charles Bowden, author of Murder City: Ciudad Juarez and the Global Economy’s New Killing Fields


“An informed and informative expose of the dark underbelly of American political corruption that was well hidden from the general public by the presidential administrations that inflicted it. . . . Invaluable and highly recommended.”—Midwest Book Review