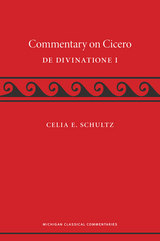 A Commentary on Cicero, De Divinatione I, is the first English-language commentary on the Latin text of Marcus Tullius Cicero’s dialogue in almost one hundred years. The defense of divination (the science of predicting the future) offered in Book 1 is illustrated with many entertaining anecdotes that make the argument more accessible to a wider range of readers than many of Cicero’s other philosophical works. De Divinatione also preserves many fragments of otherwise lost masterpieces of Roman Republican literature. It is a text important for the study of Roman religion, as well as Roman political and intellectual history.


This commentary aims to assist the reader in seeing De Divinatione as a cohesive whole, and to make it accessible—not only to classicists, but also to scholars of religion and to philosophers who may not be familiar with the historical and Roman intellectual background that are the focus here. The cases made for and against divination in De Divinatione closely follow arguments made by Greek philosophers, but many of the examples illustrating them reflect Cicero’s preferences in literature, his own poetic efforts and political experience, and his expertise as an augur. The result is a very personal work closely tied to Cicero’s own experience.


Celia Schultz’s volume contains the full Latin text of De Divinatione, Book 1, and accompanies it with commentary on points of grammar, history, prosopography, and ancient religious practice, among other topics. She includes a helpful bibliography for those interested in further study of points raised in the text or commentary.
AUTHOR BIOGRAPHY
Celia Schultz is Professor of Classical Studies, University of Michigan. She has previously published volumes on Roman religion in Italy in the Republican period, and on the practice of religion by Roman women.
REQUEST ACCESSIBLE FILE