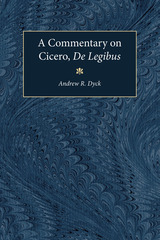 A Commentary on Cicero, De Legibus
by Andrew R. Dyck and Marcus Tullius Cicero
University of Michigan Press, 2004
Cloth: 978-0-472-11324-8
Just as Plato drafted a vision of an ideal state in his Republic and followed that up with detailed provisions in his Laws, so Cicero -- after writing a Republic -- wanted to provide legislation for his ideal state and wrote de Legibus (the Laws) as a sequel. But while Cicero's Republic was set shortly before the death of its speaker, Scipio Africanus, in 129 b.c., his de Legibus was set in his own lifetime, thus enabling him to comment on current political events and trends. Written in the final years of the Roman Republic, de Legibus is as a work that gives Cicero's own diagnosis of the ills that had befallen the Roman state and what might be done to cure them. It is thus a document crucial to our understanding of one of the most turbulent periods of Roman history.
Surprisingly, de Legibus has been one of Cicero's most neglected works. Andrew R. Dyck's commentary is the first to appear on the complete work in well over one hundred years. Dyck provides a detailed interpretation and sets the essay into the context of the politics and philosophical thought of its time. While previous commentaries focused primarily on grammar and textual criticism, this one also seeks to relate Cicero's text to the political, philosophical, and religious trends of his day. The author identifies the influences on Cicero's thinking and analyzes the relation of this theoretical treatise to his other works. This commentary is based on a new text, worked out in consultations between the author and Jonathan Powell of Royal Holloway, London.
Andrew Dyck is Professor of Classics, University of California at Los Angeles.
TABLE OF CONTENTS