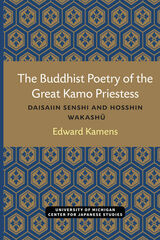 Senshi was born in 964 and died in 1035, in the Heian period of Japanese history (794–1185). Most of the poems discussed here are what may loosely be called Buddhist poems, since they deal with Buddhist scriptures, practices, and ideas. For this reason, most of them have been treated as examples of a category or subgenre of waka called Shakkyoka, “Buddhist poems.”
Yet many Shakkyoka are more like other poems in the waka canon than they are unlike them. In the case of Senshi’s “Buddhist poems,” their language links them to the traditions of secular verse. Moreover, the poems use the essentially secular public literary language of waka to address and express serious and relatively private religious concerns and aspirations. In reading Senshi’s poems, it is as important to think about their relationship to the traditions and conventions of waka and to other waka texts as it is to think about their relationship to Buddhist thoughts, practices, and texts.
The Buddhist Poetry of the Great Kamo Priestess creates a context for the reading of Senshi’s poems by presenting what is known and what has been thought about her and them. As such, it is a vital source for any reader of Senshi and other literature of the Heian period.
AUTHOR BIOGRAPHY
Edward Kamens is the author of The Three Jewels: A Study and Translation of Minamoto Tamenori’s Sanboe (Michigan Monograph Series in Japanese Studies, no. 2) and other studies of premodern Japanese prose and poetry. He is Assistant Professor in the Department of East Asian Languages and Literatures at Yale University.
TABLE OF CONTENTS
Cover
Title
Copyright
Dedication
Contents
Acknowledgments
Abbreviations
Prologue
Part One: The Great Kamo Priestess
Part Two: A Reading of Hosshin Wakashū
Epilogue
Appendix: The Text of Hosshin Wakashū
List of Characters for Names and Terms
Bibliography
Index
About the Author
REQUEST ACCESSIBLE FILE