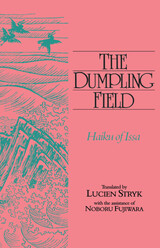 Koyashi Issa (1763–1827), long considered amoung Japan’s four greatest haiku poets (along with Basho, Buson, and Shiki) is probably the best loved. This collection of more than 360 haiku, arranged seasonally and many rendered into English for the first time, attempts to reveal the full range of the poet’s extraordinary life as if it were concentrated within a year. Issa’s haiku are traditionally structured, of seventeen syllables in the original, tonally unified and highly suggestive, yet they differ from those of fellow haikuists in a few important respects. Given his character, they had to. The poet never tries to hide his feelings, and again and again we find him grieving over the lot of the unfortunate – of any and all species.

No poet, of any time or culture, feels greater compassion for his life of creatures. No Buddhist-Issa was to become a monk—acts out the credos of his faith more genuinely. The poet, a devoted follower of Basho, traveled throughout the country, often doing the most menial work, seeking spiritual companionship and inspiration for the thousands of haiku he was to write. Yet his emotional and creative life was centered in his native place, Kashiwabara in the province of Shinano (now Nagano Prefecture), and his severest pain was the result of being denied a place in his dead father’s house by his stepmother and half brother.

By the time he was able to share the house of his beloved father, Issa had experienced more than most the grief of living, and much more was to follow with the death of his wife and their four children. In the face of all he continued to write, celebrating passionately the lives of all that shared the world with him, all creatures, all humans. Small wonder that Issa is so greatly loved by his fellow poets throughout the world, and by poetry lovers of all ages.