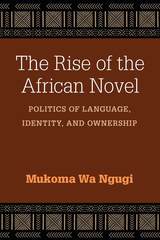 The Rise of the African Novel is the first book to situate South African and African-language literature of the late 1880s through the early 1940s in relation to the literature of decolonization that spanned the 1950s through the 1980s, and the contemporary generation of established and emerging continental and diaspora African writers of international renown.