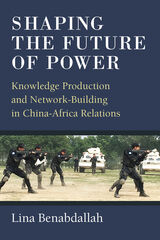 China’s rise to power is one of the biggest questions in International Relations theory (IRT) and foreign policy circles. Although power has been a core concept of IRT for a long time, the faces and mechanisms of power as it relates to Chinese foreign policymaking has changed the contours of that debate. The rise of China and other powers across the global political arena sparks a new visibility for different kinds of encounters between states, particularly between China and other Global South states. These encounters are more visible to IR scholars because of the increasing influence that rising powers have in the international system. This book shows that foreign policy encounters between rising powers and Global South states do not necessarily exhibit the same logics, behaviors, or investment strategies of Euro-American hegemons. Instead, they have distinctive features that require new theoretical frameworks for analysis. Shaping the Future of Power probes the types of power mechanisms that build, diffuse, and project China’s power in Africa. One must take into account the processes of knowledge production, social capital formation, and skills transfers that Chinese foreign policy directs toward African states to fully understand China’s power-building mechanisms. The relational power framework requires these elements to capture both the material aspects and ideational people-centered aspects to power. By examining China’s investments in human resource development programs for Africa, the book reveals a vital, yet undertheorized, aspect of China’s foreign policy making.
AUTHOR BIOGRAPHY
Lina Benabdallah is Assistant Professor of Politics and International Affairs at Wake Forest University.
REVIEWS
Selected for the Washington Post's 2020 TMC African Politics Summer Reading Spectacular
— Washington Post