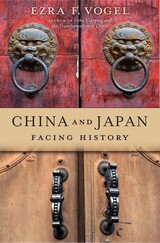 “Elegantly written…with a confidence that comes from decades of deep research on the topic, illustrating how influence and power have waxed and waned between the two countries.”
—Rana Mitter, Financial Times

China and Japan have cultural and political connections that stretch back fifteen hundred years, but today their relationship is strained. China’s military buildup deeply worries Japan, while Japan’s brutal occupation of China in World War II remains an open wound. In recent years both countries have insisted that the other side must openly address the flashpoints of the past before relations can improve.

Boldly tackling the most contentious chapters in this long and tangled relationship, Ezra Vogel uses the tools of a master historian to examine key turning points in Sino–Japanese history. Gracefully pivoting from past to present, he argues that for the sake of a stable world order, these two Asian giants must reset their relationship.

“Vogel uses the powerful lens of the past to frame contemporary Chinese–Japanese relations…[He] suggests that over the centuries—across both the imperial and the modern eras—friction has always dominated their relations.”
—Sheila A. Smith, Foreign Affairs

REVIEWS
This elegantly written history of the relationship between East Asia’s two major powers deploys a 1,500-year chronology with a confidence that comes from decades of deep research on the topic, illustrating how influence and power have waxed and waned between the two countries.
-- Rana Mitter Financial Times


Will become required reading…Vogel delves broadly into Japanese and Chinese societies to urge less acrimony and better mutual understanding…Displays a lifetime of deep engagement with sources in English, Chinese and Japanese…He is one of the few thinkers alive with sufficient traction to speak equally with leaders in both countries as well as people on the street.
-- Alexis Dudden Times Literary Supplement


For 1,500 years, China and Japan have taken turns as the major Asian power players, shaping each other’s destinies even as they’re often at odds. Vogel traces the nuances.
-- New York Times Book Review


The importance of this book—by one of the great Asian specialists from the U.S. of the modern era—is in alerting what will hopefully be a wide readership to how complex, and crucial, Sino-Japanese relations are, and how any complacency about the two being able to get on easily and unproblematically can be cured by attending to their long, complex and frequently acrimonious history.
-- Kerry Brown Times Higher Education


Vogel uses the powerful lens of the past to frame contemporary Chinese-Japanese relations…With scholarly care and an eye on contemporary policy, Vogel suggests that over the centuries—across both the imperial and the modern eras—friction has always dominated their relations.
-- Sheila A. Smith Foreign Affairs


A sweeping, often fascinating, account…Impressively researched and smoothly written, China and Japan is a timely reminder of how public perceptions are shaped by political expediency, how new leaders and propaganda can efface existing goodwill.
-- Nicolas Gattig Japan Times


While it is not easy for outsiders to plumb the deep-seated emotions and complex psychology of the Sino-Japanese relationship, no one is better qualified to help us than Ezra Vogel. As the author of many important and influential books on both countries and possessing an extraordinary network of contacts among scholars and policy makers in China, Japan, and the United States, he is truly a unique scholar of Asia, and it is no surprise that his new volume is a work of exceptional learning.
-- Kenneth Pyle Monumenta Nipponica


Ezra Vogel’s China and Japan is more than just an important, new addition to scholarship. Based on more than half a century of Vogel’s own work, along with that of many others, this masterful book traces the long relationship between China and Japan in a way that favors neither over the other and covers a wide range of social, political, economic, and cultural ties. General readers and scholars alike have much to gain from reading this marvelous and welcome history of the interactions between China and Japan.
-- Joshua A. Fogel, author of Articulating the Sinosphere