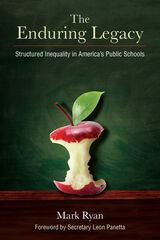 Enduring Legacy describes a multifaceted paradox—a constant struggle between those who espouse a message of hope and inclusion and others who systematically plan for exclusion. Structured inequality in the nation’s schools is deeply connected to social stratification within American society. This paradox began in the eighteenth century and has proved an enduring legacy. Mark Ryan provides historical, political, and pedagogical contexts for teacher candidates—not only to comprehend the nature of racial segregation but, as future educators, to understand their own professional responsibilities, both in the community and in the school, to strive for an integrated classroom where all children have a chance to succeed. The goal of providing every child a world-class education is an ethical imperative, an inherent necessity for a functioning pluralistic democracy. The challenge is both great and growing, for teachers today will face an evermore segregated American classroom.
AUTHOR BIOGRAPHY
Mark Ryan is an adjunct professor at National University. He has a Doctorate in Higher and Adult Education from Arizona State University at Tempe and was awarded the President’s Distinguished Teaching Award at National University. He is the author of Ask the Teacher: A Practitioner’s Guide to Teaching and Learning in the Diverse Classroom. This book can be found in nearly three hundred university libraries around the world.
REVIEWS
“A must read and resource for educators! Mark Ryan's timely book explores the historical, political, and pedagogical reality of growing segregation and racial isolation in America’s twenty-first-century public schools. He provides a clear historical trajectory of segregation in America, and presents solutions to provide equitable education for all children.”
—Nilsa J. Thorsos, National University
— Nilsa J. Thorsos, National University

TABLE OF CONTENTS
Contents
List of Figures
Foreword
Preface
Acknowledgments
Part 1: A Historical Analysis
A Struggle between Forces
An Ambiguous Philosophical Root
Growing Democratic Values
The Evolution from Common School to Public School
American Exceptionalism
What Is the Profession of a Woman?
A Plan for Inclusion
The Committee of Ten and the Cardinal Principles
A Particular Solution for a Specific Problem
Social Darwinism as Justification
White Superiority via Pseudo Empiricism
Assimilation via Americanism in the Classroom
Personification of Duality: Cubberley’s Life and Legacy
Cubberley’s Hierarchy
Structured Inequality via Perceived Ability Grouping
Tracking and Segregation Endure
Part 2: The Politics of Structured Inequality from Johnson to Trump
The Cycle of Segregation, Desegregation, and Resegregation
Structured Inequality: From Political Strategy to Pedagogical Practice
Courts and the Persistence of Structured Inequality
The Court and “Race Neutral” Diversity
The Southern Strategy
LBJ: Integrate and Get Funding or Stay Segregated and Get Nothing
Political Ambiguity on Integration
Nixon’s Rise Bolstered by the Southern Strategy
Nixon’s Ambiguity on Integration and the Courts
Ford Continues Nixonian States’ Rights Policies
Jimmy Carter, a Son of the South, Disrupts the Southern Strategy
Reagan Nullifies LBJ’s Integration Legacy via the Southern Strategy
Reagan Reverses Policies against Race Discrimination
Reagan: Busing to Desegregate—Waste of Time and Public Money
George Herbert Walker Bush and an Evolving Southern Strategy
Southern Ticket of Clinton and Gore Wins as Resegregation Persists
Bill Clinton’s Recognition of Resegregation in the 1990s
Obama Defeats Southern Strategy Even as School Resegregation Increases
Trump Triumphant and the Spread of the Southern Strategy
From LBJ to Trump: Segregation to Desegregation to Resegregation
Part 3: Pedagogical Plans to Desegregate America’s Classrooms
Desegregation of Public Schools in the Twenty-First Century
The Pedagogic Case for Racial Integration
The Cognitive Benefits of a Diverse Learning Environment
Affective Benefits of a Diverse Learning Environment
Paradox of Segregation and the Negligence of Scholars
Solution Sets to Desegregation in the 2020s
Vital Role of Schools and Colleges of Education
Gender as a Marker of Difference
Culturally Relevant Teaching and Learning
Dual Paradigm of Onsite and Online
Hybrid Model Plus Service Learning
Final Thoughts
Notes
Bibliography
Image Credits
Index
REQUEST ACCESSIBLE FILE