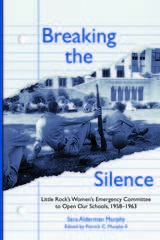 The Little Rock Central High School integration crisis did not end in1957 when President Eisenhower sent a portion of the first Airborne Division to protect nine black students. The turmoil was entering its second year in 1958 when Arkansas governor Orval Faubus invoked a hastily passed state law to close the high schools rather than obey the federal court orders that would integrate them.

A group of respectable, middle-class white women, faced with the prospect of no schools as well as the further loss of their city’s good name, turned militant. Led by Adolphine Fletcher Teny, a prominent, “old family” civic leader in her seventies, the wome n quickly put together the Women’s Emergency Committee to Open Our Schools (WEC), a highly effective organization that bombarded the city with ads, fliers, and statements challenging Faubus’s action. At peak membership, the WEC mustered two thousand
to their cause. Largely inexperienced in politics when they joined the WEC, these women became articulate, confident promoters of public schools and helped others to understand that those schools must be fully integrated.

Forty years later, Sara Murphy, a key member of the WEC, recounts the rarely told sto1y of these courageous women who formed a resistance movement. With passion and sensitivity, she reconstructs the challenges and triumphs of that battle, which issued from the mutual link Southern white women shared with disfranchised African Americans in their common goal for full citizenship.

AUTHOR BIOGRAPHY
Sara Murphy spent most of her life in educational renewal and reform, women’s advocacy, and the civil rights movement. Her many publications include Beyond the Barriers: Successful Educational Interventions in Arkansas. Dr. Murphy founded and coordinated the Little Rock Panel of American Women, a multiethnic, multiracial group of women who presented programs on prejudice reduction from 1963 to 1972. She died in Little Rock on April 15, 1995.
TABLE OF CONTENTS
Contents
Illustrations
Preface
Foreword
Introduction
1. Adolphine Fletcher Terry
2. Little Rock in the I950S
3. Crisis at Central High
4. Call Out the Women
5. Breaking the Silence
6. Barefooted and Pregnant
7. A Question of Conscience
8. Stop This Outrageous Purge
9. A Community Divided
10. To the Ladies, God Bless 'Em
11. They Would Bow Their Heads
12. Panel of American Women
Epilogue
Notes
Bibliography
Index
REQUEST ACCESSIBLE FILE