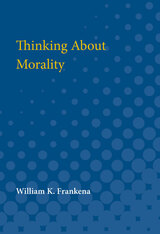 Thinking About Morality
by William K. Frankena
University of Michigan Press, 1980
Paper: 978-0-472-06316-1
Many people think about, and talk about, morality: journalists, novelists, social scientists, doctors, lawyers, and theologians. Most of their thinking and talking is either polemical—attacking or defending morality or proclaiming a "new" morality—or it is concerned with some popular, practical moral issue like abortion, euthanasia, or war. The author of Thinking About Morality believes that, to be helpful and sound, such moral thinking must be done in the context of a general theory or systematic philosophy of morality—something moral philosophers have long been trying to provide. In this book the author offers much of his own basic theory of morality, hoping that it will be of use to his readers in their thinking about morality, whatever the nature of their interest may be.