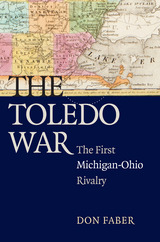 "An engaging account of the Toledo War of 1835, a serious confrontation whose outcome established the borders of the state of Michigan. Faber expertly narrates the history of a dispute conducted by fascinating characters practicing political shenanigans of the highest order."
---Andrew Cayton, author of Ohio: The History of a People and a general editor of The American Midwest: An Interpretive Encyclopedia


Most are familiar with the Michigan-Ohio football rivalry, an intense but usually good-natured contest that stretches back over one hundred years. Yet far fewer may know that in the early nineteenth century Michigan and Ohio were locked in a different kind of battle---one that began before Michigan became a state.

The conflict started with a long-simmering dispute over a narrow wedge of land called the Toledo Strip. Early maps were famously imprecise, adding to the uncertainty of the true boundary between the states. When Ohio claimed to the mouth of the Maumee River, land that according to the Northwest Ordinance of 1787 fell in the territory of Michigan, the "Toledo War" began.

Today the fight may bring a smile to Michiganians and Ohioans because both states benefited: Ohioans won the war and Michigan got the Upper Peninsula. But back then passions about rightful ownership ran high, and it would take many years---and colorful personalities all the way up to presidents---to settle the dispute. The Toledo War: The First Michigan-Ohio Rivalry gives a well-researched and fascinating account of the famous war.

Don Faber is best known as the former editor of the Ann Arbor News. He also served on the staff of the Michigan Constitutional Convention, won a Ford Foundation Fellowship to work in the Michigan Senate, and was a speechwriter for Michigan governor George Romney. Now retired, Faber lives in Ann Arbor with his wife, Jeannette, and indulges in his love of Michigan history.