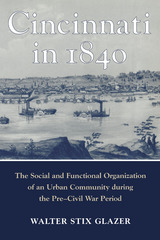 During the pre-Civil War period, Cincinnati was the fastest growing and, according to many contemporary observers, most interesting city in America. This classic study, completed in the early 1970s, focuses on the community in 1840 to explain its success but also to suggest some broader patterns in the city’s development and American urbanization.

Using local census records, city directories, tax lists, newspapers, and other contemporary sources, Walter Stix Glazer describes the demographic, social, economic, and political structure of the adult white male population in 1840 and then develops a unified model of its social and functional organizations. This analysis (based on computerized records of thousands of Cincinnatians) also documents some broader trends between 1820 and 1860: the volatility of Cincinnati’s labor force, the career patterns of its homeowners, and the leadership of a small group of successful citizens active in a broad range of voluntary associations.

This statistical analysis is complemented with sections of traditional historical narrative and biographical profiles that illustrate the general themes of the book. Glazer argues that Cincinnati’s success up to 1840 was due to a unified booster vision and a cohesive community elite that gradually broke down, as a result of ethnic and economic division, over the next twenty years. This story has broader implications in terms of the character of Jacksonian democracy and American urbanization.

AUTHOR BIOGRAPHY
Walter Stix Glazer taught history and sociology at the University of Pittsburgh. He now owns a consulting firm in Cleveland. Carl Abbott is a professor of history, School of Urban Studies and Planning at Portland State University and the coauthor of American Journey, Volume 1: A History of the United States.
TABLE OF CONTENTS