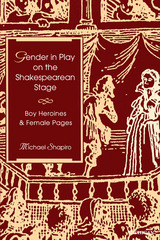 Cross-dressing, sexual identity, and the performance of gender are among the most hotly discussed topics in contemporary cultural studies. A vital addition to the growing body of literature, this book is the most in-depth and historically contextual study to date of Shakespeare's uses of the heroine in male disguise--man-playing-woman-playing-man--in all its theatrical and social complexity.
Shapiro's study centers on the five plays in which Shakespeare employed the figure of the "female page": The Two Gentlemen of Verona, The Merchant of Venice, As You Like It, Twelfth Night, and Cymbeline. Combining theater and social history, Shapiro locates Shakespeare's work in relation to controversies over gender roles and cross-dressing in Elizabethan England.
The popularity of the "female page" is examined as a playful literary and theatrical way of confronting, avoiding, or merely exploiting issues such as the place of women in a patriarchal culture and the representation of women on stage. Looking beyond and behind the stage for the cultural anxieties that found their way into Shakespearean drama, Shapiro considers such cases as cross-dressing women in London being punished as prostitutes and the alleged homoerotic practices of the apprentices who played female roles in adult companies. Shapiro also traces other Elizabethan dramatists' varied uses of the cross-dressing motif, especially as they were influenced by Shakespeare's innovations.
"Shapiro's engaging study is distinguished by the scope of interrelated topics it draws together and the balance of critical perspectives it brings to bear on them." --Choice
Michael Shapiro is Professor of English, University of Illinois, Urbana.
AUTHOR BIOGRAPHY

Michael Shapiro is Professor of English, University of Illinois, Urbana.

REVIEWS
"Shapiro's engaging study is distinguished by the scope of interrelated topics it draws together and the balance of critical perspectives it brings to bear on them."
—Choice
— Choice