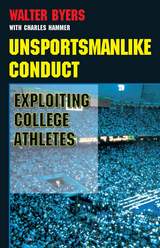 Walter Byers, who served as NCAA executive director from 1951 to 1987, was charged with the dual mission of keeping intercollegiate sports clean while generating millions of dollars each year as income for the colleges. Here Byers exposes, as only he can, the history and present-day state of college athletics: monetary gifts, questionable academic standards, advertising endorsements, legal battles, and the political manipulation of college presidents.
Byers believes that modern-day college sports are no longer a student activity: they are a high-dollar commercial enter-prise, and college athletes should have the same access to the free market as their coaches and colleges. He favors no one as he cites individual cases of corruption in NCAA history. From Byers' first enforcement case, against the University of Kentucky in 1952, to the NCAA's 1987 "death penalty" levied against Southern Methodist University of Dallas, he shows the change in the athletic environment from simple rules and personally responsible officials to convoluted, cyclopedic regulations with high-priced legal firms defending college violators against a limited NCAA enforcement system. This book is a must for anyone involved in college sports--athletes, coaches, fans, college faculty, and administrators.
"There has been no other executive in the history of professional, college, or amateur sports who has had such an impact in his area." --Keith Jackson, ABC Sports
"Walter Byers has done more to shape intercollegiate athletics that any single person in history. He brought a combination of leadership, insight, and integrity to intercollegiate athletics that we will never again see equaled." --Bob Knight, Head Basketball Coach, Indiana University
As NCAA executive director, Byers started the an enforcement program, pioneered a national academic rule for athletes, and signed more than fifty television contracts with ABC, CBS, NBC, ESPN, and Turner Broadcasting. He oversaw the growth of the NCAA basketball tournament to one that, in 1988, grossed $68.2 million. As the one person who has been inside college athletics for forty years, Walter Byers is uniquely qualified to tell the story of the NCAA and today's exploitation of college athletes.
TABLE OF CONTENTS
Contents
Introduction
1. The Business of Our Business
2. The Governor and the "Death Penalty"
3. The Birth of Big Time
4. A New NCAA: Enforcement Begins
5. Full Rides in the Name of Amateurism
6. The Explosion of Growth
7. The Tug of War
8. Enforcement under Attack
9. Commercializing Christmas
10. Riots of the Sixties
11. Rules Are Not for Enforcing
12. Beating the System
13. Not Enough Money
14. The Pursuit of Power and Money
15. Enforcing the Antitrust Laws
16. Academic Standards and Athletes
17. Flight from Accountability
18. The Enemy of Reform
19. On the Record
Index
REQUEST ACCESSIBLE FILE