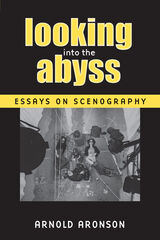 Theater is, first and foremost, a visual art; Looking Into the Abyss examines the ways in which the visual theater affects our understanding of the dramatic event. Arnold Aronson, an internationally prominent historian and theorist of theater set design, opens with an overview of scenographic concepts, including postmodern design and the use of new media in the theater, and continues with analyses of the work of specific designers (including Richard Foreman and David Rockwell) and scenographic responses to playwrights like Chekhov and Tony Kushner. These essays serve to open a dialogue that will bring the physical aspect of theater back into its proper place: an element as integral to the performance as the spoken word, and they will inspire theater-goers to become more aware of their role as seers of the theater.

Arnold Aronson is Professor of Theater, Columbia University. He is author of American Avant-Garde Theatre: A History; Architect of Dreams: The Theatrical Vision of Joseph Urban; American Set Design; and The History and Theory of Environmental Scenography.