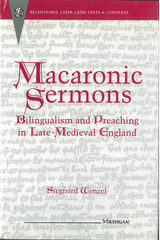 Siegfried Wenzel's groundbreaking study seeks to describe and analyze the linguistically mixed, or macaronic, sermons in late fourteenth-century England.  Not only are these works of considerable religious interest, they provide extensive information on their literary, linguistic, and cultural milieux.

Macaronic Sermons begins by offering a typology of such works: those in which English words offer glosses, or offer structural functions, or offer neither of the two but yet are syntactically integrated.  This last group is then examined in detail: reasons are given for this usage and for its origins, based on the realities of fourteenth-century England.

Siefriend Wenzel draws valuable conclusions about the linguistic status quo of the era, together with the extent of education, the audiences' expectations, and the ways in which the authors' minds worked.