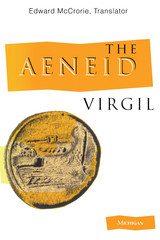 Called "the best poem by the best poet," Virgil's Aeneid is perhaps the most famous work in Latin literature. It tells the story of Rome's founding by the Trojan prince Aeneas after many years of travel, and it contains many of the most famous stories about the Trojan War. It also reveals much of what the Romans felt and believed about themselves- the sensitive reader will see that these same values and issues often trouble us today.
In this new translation Edward McCrorie has performed the difficult task of rendering Virgil's compact, dense Latin into fine, readable, modern English verse. The sometimes complex text is made clear and comprehensible even for first-time readers, and a glossary of names helps identify characters and place-names in the poem. The translation is well suited for students at all levels, and readers already familiar with Virgil will find many fresh images and ideas.
"A brilliant effort."--Robert Bly
"I admire the ambition of the project, and the generosity of many of the lines."--Robert Fagles
Edward McCrorie is Professor of English, Providence College. His poetry and translations of Latin verse have been widely published.
REVIEWS

"Splendid and vigorous . . . I have rejoiced in your capture of Latinate rhythms, your frequent use of amphibrachs and hendecasyllabics. The poem moves with both grandeur and swift pace. You have done a handsome job."
—Anthony Hecht

"I think you have done it outstandingly. I like very much the movement and energy of your verse and often I was struck by the unhackneyed and absolute propriety of your renderings."
—Charles Fornara, Brown University

"I have read [your translation] with great pleasure, finding your lines beautiful, intelligible—and close to Vergil's! Despite the recent spate of Aeneid translations, I think that if your version, which now exists as a work of art, could be produced inexpensively in paperback, it would be a good choice in Classics in Translation courses."
—Deborah Boedecker, Center for Hellenic Studies

"Your version seemed to me to be not only sound and tasteful but most readable."
—Frank O. Copley, University of Michigan

"[The whole translation] looks good to me. These are handsome pages. Your introduction also reads well, with its reminder that Virgil was an Italian and its stressing the operative qualities of his work."
—John Frederick Nims

"It is a delight to note the appearance of a splendid new translation of Virgil's Aeneid by Edward McCrorie . . . a vigorous and intelligent rendering of Virgil's epic in modern idiom . . . the rendering of Aeneas' encouraging words to his men is realistic and vigorous, and the passage is not reduced to a set of famous Virgilian one-liners. The net effect of this style of translation is to maintain the narrative pace of Virgil's excellent story while preserving ambiguities that are often lost when Virgil is translated as a source for quotable quotes. . . . This new translation is also remarkable for its dynamic rendering of great descriptive passages."
—John M. Lawless, Providence College

"I have been enjoying [your translation's] live diction, its plain nobility of tone, its supple movement and narrative urgency."
—Richard Wilbur

"I admire the ambition of your project and the generosity of many of your lines."
—Robert Fagles

"While no translator can claim to have captured wholly the breathtakingly beautiful Latin of the Aeneid, McCrorie, a poet of great skill and imagination, can come close to matching the artistry of the Roman bard. . . . In his excellent introduction to the volume, Vincent Cleary invites American readers to reclaim the Aeneid as a classic that resonates with our culture. McCrorie's translation can help achieve this goal. It retains most of what readers over the ages have found appealing in the poem: the powerful drama, the melancholy, the chilling ambiguity. What is more, it serves these up as only a poet could. An Anglophone St. Augustine, on reading McCrorie's translation, would, I think, still be moved to tears by Dido's plight and the beauty of the poem."
—Blaise Nagy, Harvard Review

". . . a phenomenal and masterly tour de force. [McCrorie] has presented us with a version of the Aeneid translated line by line, remarkable for its fidelity to the original not only in literal meaning, but also—equally important—in spirit and sense. . . . [McCrorie's] lines abound with the beauty of the original. . . . This is a superlative translation, well worth reading in full or merely keeping at one's side for occasional forays. Do yourself a favour—buy it!"
—Joint Association of Classical Teachers

"This reader's impression of the Aeneid in Edward McCrorie's new translation was that of power—the power of the story and especially of the narrative art itself. . . . The reader without Latin or much experience of epic might better enjoy this version than other, more minutely faithful, renderings. I would not hesitate to recommend it for that group as well as for Latinists interested in reconsidering the Vergil we think we know."
—New England Classical Letter and Journal

". . . a vigorous and intelligent rendering of Virgil's epic in modern idiom. . . . [This] translation captures the half-hearted attempt of Aeneas to persuade his men (and himself) that good times are ahead. Equally important, the rendering of Aeneas' encouraging words is realistic and vigorous, and the passage is not reduced to a set of famous Virgilian one-liners. The net effect of this style of translation is totain [sic] the narrative pace of Virgil's excellent story while preserving ambiguities that are often lost when Virgil is translated as a source for quotable quotes. This new version is also remarkable for its dynamic rendering of great descriptive passages. Such 'purple passages' show both Virgil and Prof. McCrorie as accomplished poets."
—Providence

"What's right with this translation is that today's reader can read it. Virgil's poetry remains in modern garb. The language is clean and clear and precise, and best of all it is today's language. . . . If you've wanted since your Latin 4 days to take an unhurried look at the Aeneid, this book is a fine way to do it."
—Providence Journal Bulletin