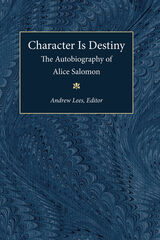 In her autobiography, the remarkable feminist and social worker Alice Salomon recounts her transition in the 1890s from privileged idleness to energetic engagement in solving social problems. Salomon took the lead in establishing the profession of social work, and built a career as a social reformer, activist, and educator. A prolific author, Salomon also played a key role in the transatlantic dialogue between German and American feminists in the early twentieth century. Her narrative concludes with the account of her expulsion from Germany by the Nazis in 1937.
Salomon's formative influence on the field of social work makes her story crucial for the history of the discipline. This work will also appeal to anyone with an interest in the history of the feminist and socialist movements or the political and social history of twentieth-century Germany. The volume also includes several of Salomon's essays on social work and women's issues, along with photographs of Salomon, her students, and her colleagues.
Andrew Lees is Professor and Chair of the History Department at Rutgers University, Camden.
TABLE OF CONTENTS