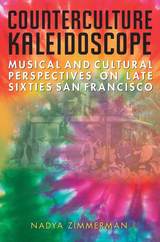 Forty years after the fact, 1960s counterculture---personified by hippies, protest, and the Summer of Love---basks in a nostalgic glow in the popular imagination as a turning point in modern American history and the end of the age of innocence. Yet, while the era has come to be synonymous with rebellion and opposition, its truth is much more complex.

In a bold reconsideration of the late sixties San Francisco counterculture movement, Counterculture Kaleidoscope takes a close look at the cultural and musical practices of that era. Addressing the conventional wisdom that the movement was grounded in rebellion and opposition, the book exposes two myths: first, that the counterculture was an organized social and political movement of progressives with a shared agenda who opposed the mainstream (dubbed "hippies"); and second, that the counterculture was an innocent entity hijacked by commercialism and transformed over time into a vehicle of so-called "hip consumerism."

Seeking an alternative to the now common narrative, Nadya Zimmerman examines primary source material including music, artwork, popular literature, personal narratives, and firsthand historical accounts. She reveals that the San Francisco counterculture wasn't interested in commitments to causes and made no association with divisive issues---that it embraced everything in general and nothing in particular.

"Astute and accessible, Counterculture Kaleidoscope provides thought-provoking insights into the historical, cultural and social context of the San Francisco counter-culture and its music scene, including discussions of Vietnam and student protest, the Haight-Ashbury Diggers, the Grateful Dead, Led Zeppelin, Altamont, and Charlie Manson. A must for students and scholars of socio-musical activity and for all of us to whom music matters."
---Sheila Whiteley, author of The Space Between the Notes: Rock and the Counter-Culture and Too Much Too Young: Popular Music, Age and Gender

"The hippie counterculture has never garnered the scholarly attention accorded the new left and the black freedom struggle. Overviews of the period ritualistically mention it as part and parcel of that apparently incandescent era---the Sixties---but rarely capture its distinctiveness. Counterculture Kaleidoscope is a timely and provocative intervention in Sixties scholarship that significantly deepens our understanding of this important but understudied phenomenon."
—Alice Echols, Associate Professor, University of Southern California, and author of Scars of Sweet Paradise: The Life and Times of Janis Joplin

Nadya Zimmerman received her Ph.D. in musicology at the University of California, Los Angeles.