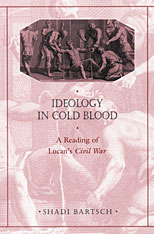 Is Lucan's brilliant and grotesque epic Civil War an example of ideological poetry at its most flagrant, or is it a work that despairingly proclaims the meaninglessness of ideology? Shadi Bartsch offers a startlingly new answer to this split debate on the Roman poet's magnum opus.

Reflecting on the disintegration of the Roman republic in the wake of the civil war that began in 49 B.C., Lucan (writing during the grim tyranny of Nero's Rome) recounts that fateful conflict with a strangely ambiguous portrayal of his republican hero, Pompey. Although the story is one of a tragic defeat, the language of his epic is more often violent and nihilistic than heroic and tragic. And Lucan is oddly fascinated by the graphic destruction of lives, the violation of human bodies--an interest paralleled in his deviant syntax and fragmented poetry. In an analysis that draws on contemporary political thought ranging from Hannah Arendt and Richard Rorty to the poetry of Vietnam veterans, as well as on literary theory and ancient sources, Bartsch finds in the paradoxes of Lucan's poetry both a political irony that responds to the universally perceived need for, yet suspicion of, ideology, and a recourse to the redemptive power of storytelling. This shrewd and lively book contributes substantially to our understanding of Roman civilization and of poetry as a means of political expression.

The Subject under Siege
Paradox, Doubling, and Despair
Pompey as Pivot
The Will to Believe
History without Banisters

Reviews of this book:
The problem of Lucan's stance is notorious, and it is the focus of Bartsch's book...She makes her own gripping contribution to the dossier of Lucanian despair in her first two chapters; but she believes that ultimately such interpretations sell the poet short, as an artist and a person. Her Lucan, both inside and outside his poem, is a Sartrean existentialist or a Rortyan moral ironist, who accepts the evanescence of traditional moral and political verities but who behaves as if his ideology matters anyhow and makes his choice regardless. Hence the "ideology in cold blood" of her title: Lucan knows, and spellbindingly demonstrates, that Liberty is a cipher, but he commits himself to it none the less. Bartsch has put her finger on a key issue, and her passionate book is a useful check to the establishment of a new orthodoxy on Lucan.
--Denis Feeney, Times Literary Supplement

Reviews of this book:
This could be that elusive creature, an Important Book.
--Gideon Nisbet, Bryn Mawr Classical Review

Reviews of this book:
This is a stimulating work, which I find has provoked many questions about Lucan's poem, about liberal irony, and about history...The strengths of this book lie in its brevity, in its integration of detailed analyses with broader theoretical issues, and in its accessibility. It addresses a question which is of relevance to not only Lucanians, or Latinists, or classicists, but anyone who thinks about the politics of literature.
--Ellen O'Gorman, Classical World

Reviews of this book:
Bartsch goes far beyond the boundaries of Lucan's Civil War itself. Readers interested in Latin literature in general, in the civil wars that ended the Republic, in the political context of the first centuries B.C.E. and C.E., in questions of human response to political repression long after Lucan, and those interested in Lucan himself as poet and conspirator, will want to read Ideology in Cold Blood. Bartsch has taken two prevailing camps of criticism--Lucan as "nihilist" and Lucan as "partisan"--and proposed an elegantly argued third alternative: Lucan as "political ironist."
--Choice

Reviews of this book:
Ideology in Cold Blood provides a strikingly dissident approach to Lucan in that it aims to weld together a text-oriented focus, a political reading of the Civil War and a discussion of Lucan's political activities, i.e. his involvement in the Pisonian conspiracy. Bartsch's decision to include a biographical approach in her analysis should not be taken for bland naivety coming at a time when influential scholars on Lucan have come to reject this approach for the blatant fallacies that it entails. Bartsch offers something completely novel in this area, for it is entirely obvious that her sympathies do not lie with forms of historical reconstructionism in which the biographical data are simply made to correlate with the presumed political message of the poem...[Bartsch's book] will surely be ranked among the best works on the poet and I strongly recommend it to scholars interested in the literature of the Principate and in the role of Roman political epic.
--Marc Kleijwegt, Scholia
TABLE OF CONTENTS
Contents
Preface
Introduction
ONE: The Subject under Siege
TWO: Paradox, Doubling, and Despair
THREE: Pompey as Pivot
FOUR: The Will to Believe
FIVE: History without Banisters
Notes
Bibliography
Index