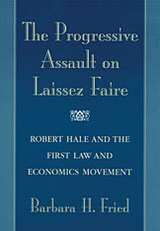 Law and economics is the leading intellectual movement in law today. This book examines the first great law and economics movement in the early part of the twentieth century through the work of one of its most original thinkers, Robert Hale. Beginning in the 1890s and continuing through the 1930s, progressive academics in law and economics mounted parallel assaults on free-market economic principles. They showed first that "private," unregulated economic relations were in fact determined by a state-imposed regime of property and contract rights. Second, they showed that the particular regime of rights that existed at that time was hard to square with any common-sense notions of social justice.

Today, Hale is best known among contemporary legal academics and philosophers for his groundbreaking writings on coercion and consent in market relations. The bulk of his writing, however, consisted of a critique of natural property rights. Taken together, these writings on coercion and property rights offer one of the most profound and elaborated critiques of libertarianism, far outshining the better-known efforts of Richard Ely and John R. Commons. In his writings on public utility regulation, Hale also made important contributions to a theory of just, market-based distribution.

This first, full-length study of Hale's work should be of interest to legal, economic, and intellectual historians.
TABLE OF CONTENTS