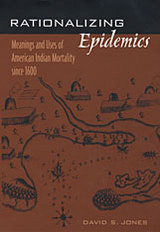 Ever since their arrival in North America, European colonists and their descendants have struggled to explain the epidemics that decimated native populations. Century after century, they tried to understand the causes of epidemics, the vulnerability of American Indians, and the persistence of health disparities. They confronted their own responsibility for the epidemics, accepted the obligation to intervene, and imposed social and medical reforms to improve conditions. In Rationalizing Epidemics, David Jones examines crucial episodes in this history: Puritan responses to Indian depopulation in the seventeenth century; attempts to spread or prevent smallpox on the Western frontier in the eighteenth and nineteenth centuries; tuberculosis campaigns on the Sioux reservations from 1870 until 1910; and programs to test new antibiotics and implement modern medicine on the Navajo reservation in the 1950s. These encounters were always complex. Colonists, traders, physicians, and bureaucrats often saw epidemics as markers of social injustice and worked to improve Indians' health. At the same time, they exploited epidemics to obtain land, fur, and research subjects, and used health disparities as grounds for "civilizing" American Indians. Revealing the economic and political patterns that link these cases, Jones provides insight into the dilemmas of modern health policy in which desire and action stand alongside indifference and inaction.

Rationalizing Epidemics is a superb work of scholarship. By contextualizing his deep and thorough research in original documents within the larger literature on the history and nature of epidemics, Jones has produced a profound account of how epidemics are social and cultural phenomena, not just biological. This book will be of great interest to scholars of American Indian history and the history of medicine, and with its engaging and accessible writing style, it promises to be a book that students and the general public will appreciate as well.
--Nancy Shoemaker, University of Connecticut

An imaginative and insightful approach to health and disease among American Indians, Rationalizing Epidemics represents a remarkable accomplishment. The breadth of reading and depth of research, the subtlety used in explaining each case, and the original approach to the material are altogether impressive. Jones's book undoubtedly will be a major contribution to American history.
--Daniel H. Usner, Jr., Vanderbilt University
TABLE OF CONTENTS
Contents
List of Figures
Acknowledgments
Introduction
1. Expecting Providence
2. Meanings of Depopulation
3. Frontiers of Smallpox
4. Using Smallpox
5. Race to Extinction
6. Impossible Responsibilities
7. Pursuit of Efficacy
8. Experiments at Many Farms
Epilogue and Conclusions
Notes
Index