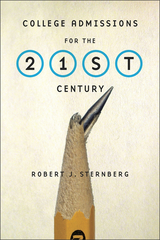 SATs, ACTs, GPAs. Everyone knows that these scores can’t tell a college everything that’s important about an applicant. But what else should admissions officers look for, and how can they know it when they see it? In College Admissions for the 21st Century a leading researcher on intelligence and creativity offers a bold and practical approach to college admissions testing.

How can the potential for those complex qualities be measured? One answer is “Kaleidoscope,” a new initiative in undergraduate admissions, first used at Tufts University. Its open-ended questions for applicants, and the means used to score the answers, gives applicants and admissions officers the chance to go beyond standardized tests.

Does it work? As Sternberg describes in detail, Kaleidoscope measures predicted first-year academic success, over and above SATs and high school GPAs, and predicted first-year extracurricular activities, leadership, and active citizenship as well. And every year that Kaleidoscope measures were used, the entering class’s average SATs and high school GPAs went up too.

What worked at Tufts can work elsewhere. New kinds of assessments, like Kaleidoscope, can liberate many colleges and students from the narrowness of standardized tests and inspire new approaches to teaching for new kinds of talented, motivated citizens of the world.
TABLE OF CONTENTS
Contents
Preface
1. College Admissions and Testing
2. How We Got Here: The Traditional College Application
3. Alternative Admissions Practices
4. A New Way of Looking at Intelligence and Success
5. Assessing Hidden Talents
6. Encouraging Creativity, Practical Intelligence, and Wisdom
7. Implications for Students, Colleges, and Society
Appendix: Kaleidoscope Questions for the Classes of 2011-2014
Notes
Index