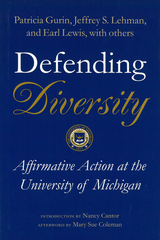 "Readers interested in broad historical and social analysis of affirmative action will appreciate this book."
—Booklist

"Defending Diversity documents the extraordinary effort made by the University of Michigan to defend its race-sensitive admissions policies against a determined legal assault. Drawing liberally from supportive testimony from business, the professions, and the military and from extensive empirical research, the University makes a powerful case to demonstrate how much racial diversity matters to the quality of education and to the future of America. At a time when university leaders are often criticized for failing to speak out on important public issues, the successful campaign mounted by these Michigan officials seems al the more remarkable."
—Derek Bok

". . . provides a framework and model to moderate dialogues across America about diversifying the states' public flagship universities. . . . Data and conclusions presented in Defending Diversity support the notion that wide-ranging and positive benefits exist where students interact and learn from each other when lines of race and ethnicity intersect. Defending Diversity tells the encouraging story of the University of Michigan's role in constructing a diverse democracy and its place in the nation's history in mounting a successful defense of affirmative action before the Supreme Court."
—Multicultural Review