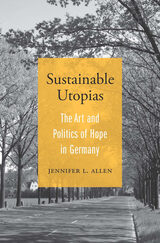 To reclaim a sense of hope for the future, German activists in the late twentieth century engaged ordinary citizens in innovative projects that resisted alienation and disenfranchisement.

By most accounts, the twentieth century was not kind to utopian thought. The violence of two world wars, Cold War anxieties, and a widespread sense of crisis after the 1973 global oil shock appeared to doom dreams of a better world. The eventual victory of capitalism and, seemingly, liberal democracy relieved some fears but exchanged them for complacency and cynicism.

Not, however, in West Germany. Jennifer Allen showcases grassroots activism of the 1980s and 1990s that envisioned a radically different society based on community-centered politics—a society in which the democratization of culture and power ameliorated alienation and resisted the impotence of end-of-history narratives. Berlin’s History Workshop liberated research from university confines by providing opportunities for ordinary people to write and debate the story of the nation. The Green Party made the politics of direct democracy central to its program. Artists changed the way people viewed and acted in public spaces by installing objects in unexpected environments, including the Stolpersteine: paving stones, embedded in residential sidewalks, bearing the names of Nazi victims. These activists went beyond just trafficking in ideas. They forged new infrastructures, spaces, and behaviors that gave everyday people real agency in their communities. Undergirding this activism was the environmentalist concept of sustainability, which demanded that any alternative to existing society be both enduring and adaptable.

A rigorous but inspiring tale of hope in action, Sustainable Utopias makes the case that it is still worth believing in human creativity and the labor of citizenship.
TABLE OF CONTENTS
Cover
Title Page
Copyright
Dedication
Contents
Introduction
Part I. New Geographies of Cultural Engagement
1. The Rise of the Spatial Interventionists
2. A Workshop of “History from Below”
3. Green Culture
Part II. The Pursuit of a Sustainable Alternative
4. A Sustainable Cultural Politics
5. A Sustainable Historical Practice
6. A Sustainable Aesthetics
Conclusion: The Fate of Sustainable Utopia
Notes
Archives and Primary Sources
Acknowledgments
Index