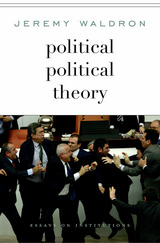 Political theorists focus on the nature of justice, liberty, and equality while ignoring the institutions through which these ideals are achieved. Political scientists keep institutions in view but deploy a meager set of value-conceptions in analyzing them. A more political political theory is needed to address this gap, Jeremy Waldron argues.