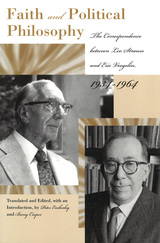 Faith and Political Philosophy consists of fifty-three letters between Leo Strauss and Eric Voegelin, two of the most important political theorists of the twentieth century. In this correspondence, Strauss and Voegelin explore the nature of their similarities and differences, offering insightful observations about one another's work, about the state of the discipline, and about the influences working on them. The letters shed light on many assumptions made in their published writings, often with an openness that removes all vestiges of uncertainty.