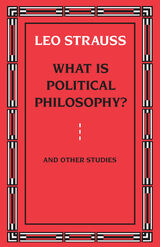 What Is Political Philosophy?—a collection of ten essays and lectures and sixteen book reviews written between 1943 and 1957—contains some of Leo Strauss's most famous writings and some of his most explicit statements of the themes that made him famous. The title essay records Strauss's sole extended articulation of the meaning of political philosophy itself. Other essays discuss the relation of political philosophy to history, give an account of the political philosophy of the non-Christian Middle Ages and of classic European modernity, and present his theory of esoteric writing.
AUTHOR BIOGRAPHY
Leo Strauss's contributions to political philosophy include Natural Right and History, Persecution and the Art of Writing, and Platonic Political Philosophy, all published by the University of Chicago Press.
TABLE OF CONTENTS