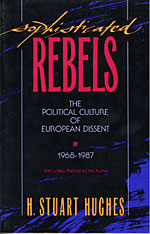 Reviews of this book:
"Written with Hughes' usual elegance, with an appealing mixture of engagement and detachment, the book gives a vivid picture of people who 'had in common a resolute moral sense'...An astoundingly compact and most informative sketch of contemporary dissidence."
--Fritz Stern, Foreign Affairs

"Hughes...is perhaps the most influential American intellectual historian of his generation...Writing with terse precision, he surveys an astonishing range of figures and issues: the French novelist Michel Tournier; Milan Kundera; the plight of immigrant workers in France and Germany; the Breton and Welsh movements for regional autonomy in France and England; John Paul II and his role in the rise of Solidarity in Poland; the socialist fiasco in France; the flowering of the ecology movement in Germany...Hughes offers a useful introduction to the contemporary intellectual scene in Europe...His summaries of thinkers are models of lucid economy, authoritative in tone, usually generous in spirit."

"Hughes' theories...are extraordinary for the way they intricately interrelate artistic and political ideas from 1968-87."

"[Hughes] presents his knowledge playfully, with a light touch, and constantly lets us see his cards during the game. The truth is that the kings, queens and jacks that Mr. Hughes pulls out, apparently at random, provide the material for an intellectual experiment: can events and movements as different as the Days of May in Paris and the Prague Spring, the Bretons in France and the Greens in Germany be found to have something in common?...Could we be dealing with an entirely new species of rebel, a form of dissent for which we still lack the appropriate concepts?...Even when Mr. Hughes occasionally leaves us wondering where this journey is taking us, he is always interesting enough to make us want to follow him."