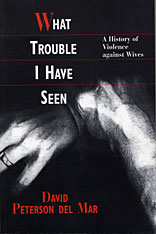 It was 1869 and Sarah Moses, with "a very black eye," told her father: The world will never know what trouble I have seen. What she'd seen was violence at the hands of her husband. Does the world know any more of such things today than it did in Sarah's time?

Sarah, it so happens, lived in Oregon, that Edenic state on the Pacific Coast, and it is here that David Peterson del Mar centers his history of violence against wives. What causes such violence? Has it changed over time? How does it relate to the state of society as a whole? And how have women tried to stop it, resist it, escape it? These are the questions Peterson del Mar pursues, and the answers he finds are as fascinating as they are disturbing.

Thousands of thickly documented divorce cases from the Oregon circuit courts let us listen to voices who often go unheard. These are the people who didn't keep diaries or leave autobiographies, who sometimes could not write at all. Here they speak of a society that quietly condoned wife beating until the spread of an ethos of self-restraint in the late nineteenth century. And then, Peterson del Mar finds, the practice increased with a vengeance with the florescence of expressive individualism during the twentieth century.

What Trouble I Have Seen also traces a dramatic shift in wives' response to their husbands' violence. Settler and Native American women commonly fought abusive mates. Most wives of the late nineteenth century acted more cautiously and relied on others for protection. But twentieth-century privatism, Peterson del Mar discovers, often isolated modern wives from family and neighbors, casting abused women on the mercy of the police, women's shelters, and, most important, their own resources. Thus a new emphasis on self-determination, even as it stimulated violence among men, enhanced the ability of women to resist and escape violent husbands.

The first sustained history of violence toward wives, What Trouble I Have Seen offers remarkable testimony to the impact of social trends on the most private arrangements, and the resilience of women subject to a seemingly timeless crime.

"To Maintain His Authority": The Settlement Era
"When a Man Stoops to Strike a Woman": The 1890s
"His Face Is Weak and Sensual": Portland and the Whipping Post Law
"To Use His Muscle on Her": 1920-1945
"We Found That We Were Not Alone": The Years after World War II

Reviews of this book:
Del Mar offers a history of woman battering in Oregon that is compassionate, richly detailed, [and] complex...The richness of this historical examination will be of great interest to scholars and students of gender, family life, and violence against women.
--James Ptacek, Contemporary Sociology

Reviews of this book:
This is a fascinating book, with a bold and clear argument and a host of insights into family life and standards...It is stimulating, often plausible, and important.
--Peter N. Stearns, American Historical Review

Reviews of this book:
What Trouble I Have Seen weaves together an extraordinary mix of contradictory threads in the histories of violence, westward expansion, race, economics, gender roles, work, attitudes about marriage and women, and changes in the economy to explain historical changes in violence against wives. It is both a local history of Oregon and a larger social analysis of changing national patterns. It is solid scholarship with an activist aim at understanding the problem in order to solve it. The complexity of Peterson Del Mar's argument is commendable. He covers the incidence and nature of male violence against wives, women's resistance to it and societal interventions in violent marriages...What Trouble I Have Seen is an immensely useful book. Peterson Del Mar's thesis regarding historical changes in the level and nature of violence against wives is a much needed contribution, as he ties together disparate changes in society. His careful reading of legal documents blended with a variety of popular culture sources gives us greater insight into the problem.
--Deborah L. Kitchen, Journal of American Culture

Reviews of this book:
What Trouble I Have Seen is informed by the author's wide reading in anthropology and related disciplines which offer insight into domestic violence and, unusually, by a year Peterson del Mar spent as a counsellor to abusive men. No doubt that work heightened his sensitivity to some of the issues; it also led him to conclude that the beliefs of abusive men regarding women are not much different from those of other men...This is an ambitious and important book, the first detailed study of wife abuse in one state over a long period.
--Jerome Nadelahft, Canadian Review of American Studies

Reviews of this book:
In What Trouble I Have Seen, Peterson Del Mar paints an extraordinary landscape of men's violence against wives, the forms of women's resistance to male violence, and nonviolent men's complicity with the ideas that underpin such violence...Peterson Del Mar's writing is clear and often moving. His effective use of the testimonies of those who have seen trouble, those who have meted out trouble, and those who have relegated it makes this a compelling read.
--Carole J. Sheffield, Signs

Reviews of this book:
[A] groundbreaking study...David Peterson del Mar has succeeded in his aim of bringing research in this tender subject to the fore. He has produced a book of notable worth containing research that is highly readable, thought-provoking and relevant to modern society.
--Icarus [UK]

A fascinating and rich study of violence against women, meticulously researched and replete with the voices of men and women who offer insights into their own lives and struggles. Peterson del Mar has crafted a careful social history, one in which he argues and demonstrates cogently that violence against wives and wives' response to that violence have varied over time and have always been shaped by the social context--material, ideological, environmental, political.
--Regina Morantz-Sanchez, University of Michigan

Provides a historical framework for understanding domestic abuse that shows how the climate of the times shapes the way we understand [such] abuse.
--Elizabeth Pleck, University of Illinois at Urbana-Champaign
TABLE OF CONTENTS