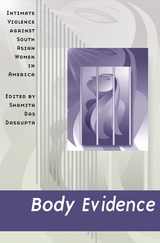 When South Asians immigrated to the United States in great numbers in the 1970s, they were passionately driven to achieve economic stability and socialize the next generation to retain the traditions of their home culture. During these years, the immigrant community went to great lengths to project an impeccable public image by denying the existence of social problems such as domestic violence, sexual assault, child sexual abuse, mental illness, racism, and intergenerational conflict. It was not until recently that activist groups have worked to bring these issues out into the open.

In Body Evidence, more than twenty scholars and public health professionals uncover the unique challenges faced by victims of violence in intimate spaces . . . within families, communities and trusted relationships in South Asian American communities. Topics include cultural obsession with women's chastity and virginity; the continued silence surrounding intimate violence among women who identify themselves as lesbian, bisexual, or transgender; the consequences of refusing marriage proposals or failing to meet dowry demands; and, ultimately, the ways in which the United States courts often confuse and exacerbate the plights of these women.