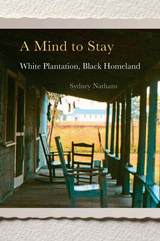 The exodus of millions of African Americans from the rural South is a central theme of black life and liberation in the twentieth century. A Mind to Stay offers a counterpoint to the narrative of the Great Migration. Sydney Nathans tells the rare story of people who moved from being enslaved to becoming owners of the very land they had worked in bondage, and who have held on to it from emancipation through the Civil Rights era.

The story began in 1844, when North Carolina planter Paul Cameron bought 1,600 acres near Greensboro, Alabama, and sent out 114 enslaved people to cultivate cotton and enlarge his fortune. In the 1870s, he sold the plantation to emancipated black families who worked there. Drawing on thousands of letters from the planter and on interviews with descendants of those who bought the land, Nathans unravels how and why the planter’s former laborers purchased the site of their enslavement, kept its name as Cameron Place, and defended their homeland against challengers from the Jim Crow era to the present day.

Through the prism of a single plantation and the destiny of black families that dwelt on it for over a century and a half, A Mind to Stay brings to life a vivid cast of characters and illuminates the changing meaning of land and landowning to successive generations of rural African Americans. Those who remained fought to make their lives fully free—for themselves, for their neighbors, and for those who might someday return.

REVIEWS
It’s as much a family saga as Downton Abbey. It’s a Southern tale much richer than Gone with the Wind. It’s a particular American story that forms the weave of the nation’s larger history, one that could easily be the basis of a long novel. It’s a revealing, sobering, yet inspiring glimpse into a part of American history little known and little seen—light-touch scholarship of the best sort.
-- James M. Banner, Jr. Weekly Standard


By tracing the story of a single plantation through generations, Nathans ably demonstrates how the legacy of slavery and oppression continues to profoundly affect the people throughout the South today. Recommended for all readers interested in Southern history or African American history.
-- Nicholas Graham Library Journal


Nathans turns the story of the Great Migration on its head in this extraordinary and wide-ranging history of the lives, labors, and land of black men and women who remained in the South. Deeply researched and written with passion, it is a brilliant and original accounting of how ‘landedness’ was achieved over two centuries of African American struggle.
-- Ira Berlin, author of The Long Emancipation: The Demise of Slavery in the United States


The Alabama Hargis family, that once worked farmland as slaves, used wit and skill, to own that very land, and, against odds, hold ownership over decades. A Mind to Stay is a rare and rich Reconstruction story told with deep understanding by Sydney Nathans.
-- William S. McFeely


Thousands of African Americans joined the Great Migration of the 20th century; what of those who stayed in the South? That is a key question. Using a rich collection of letters and records from the Cameron family of North Carolina, key sources from Alabama, and the oral histories of those who remained anchored on a Greene and Hart County (Alabama) plantation, Nathans concludes that the power of land ownership, facilitated by the sale of former plantation lands to former slaves, brought the autonomy and community connections that enabled generations to remain.
-- T. F. Armstrong Choice


A marvelous example of how ‘microhistory,’ based on a deep immersion in local sources, can illuminate broad historical patterns.
-- Eric Foner London Review of Books

TABLE OF CONTENTS
Cover
Title Page
Copyright
Dedication
Contents
Preface
Prologue: Unexpected
Part One: Proving Ground
1. Spared
2. “Emigrants"
3. “A Place Perfectly Detested"
4. Held Back
5. Reversals
Part Two: A Foothold in Freedom
6. Exile’s Return
7. “Against All Comers"
8. “If They Can Get the Land"
Photographs
Part Three: Beyond a Living
9. “Hallelujah Times"
10. “A Game Rooster"
11. Sanctuaries
Part Four: Heir Land
12. “That Thirties Wreck"
13. New Foundations
14. “Unless It’s a Must"
Epilogue: “A Heavy Load to Lift"
Appendix: The People of A Mind to Stay
Notes
Acknowledgments
Index