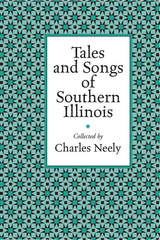 First published in 1938, this lively collection of over 150 tales and songs runs the gamut from joy to woe, from horror to humor. In forming the collection, Charles Neely required only that the tales and songs—whether home grown or transplanted from the great body of world lore— had taken root somehow in the area of southern Illinois known as Egypt.

Notable tales include "Bones in the Well," "A Visit from Jesse James," "The Flight of the Naked Teamsters," "The Dug Hill Boger," and "How Death Came to Ireland"; among the songs and ballads are "Barbara Allen," "Hog and Hominy," "The Drunkard’s Lone Child," "The Belleville Convent Fire," "Shawneetown Flood," and "The Death of Charlie Burger."

Charles Neely was an assistant professor of English at Southern Illinois Normal University from 1932 until 1937.