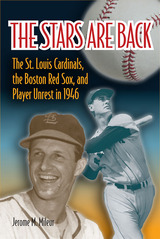 In 1946, as the aftershocks of World War II still trembled across the globe, America returned to its favorite pastime: baseball. In The Stars Are Back, Jerome M. Mileur offers a fascinating account of this storied season and of the backstage battle that would forever transform the game of professional baseball. Mileur begins with one of the most famous clashes in major league history: the neck-and-neck race to the National League pennant between the St. Louis Cardinals and the Brooklyn Dodgers. As these two iconic teams engaged in a bitter struggle leading to the first-ever playoff to determine the winner of the National League pennant, the Boston Red Sox blazed a trail to the top of the American League to face the Cardinals in the World’s Series, as it was then called.


But while the nation was riveted by the return of its beloved baseball heroes, the game behind the scenes was just as dramatic. As the threat of unionization loomed and the Mexican League continued to lure players away from the United States with lucrative contracts, tensions between players and team owners mounted. The result was a standoff for control of the game that would culminate in the Magna Carta of baseball and the creation of standard contracts for players, ushering in the modern era of baseball.

Set against the backdrop of a country recovering from war, facing the new adversary of Communism, and absorbing the emotional impact of the atomic bomb, The Stars Are Back tells the story of a nation hungry for a return to normalcy and a game poised on the brink of new horizons.

AUTHOR BIOGRAPHY
Jerome M. Mileur is emeritus professor in the political science department at the University of Massachusetts Amherst where he taught American politics.  A graduate of Southern Illinois University Carbondale, he is author or coeditor of nine books, including High-Flying Birds about the 1942 St. Louis Cardinals.  The former owner of a minor league baseball team, he coordinated a one-year interdisciplinary course on race in American life timed with the fiftieth anniversary of Jackie Robinson breaking the color barrier in Major League baseball.
TABLE OF CONTENTS
Cover
Jacket Flaps
Title Page
Copyright
Contents
Preface
Introduction
1. From Foxhole to Dugout
2. Peace Is Hell
3. The Boys Come Marching Home
Gallery #1
4. What May Be
5. Moving Up . . . and Out
6. Of Barristers and Baseball
7. The Swoons in June
8. Midsummer Dreams
9. Hardball on and off the Diamond
10. The Travails of Travel
Gallery #2
11. Dog Days and Vacation Time
12. Into the Stretch
13. To the Wire and Beyond
14. Seeing Red: Birds and Sox
15. 1946 and Beyond
Notes
Bibliography
Index
Author Biography
Back Cover