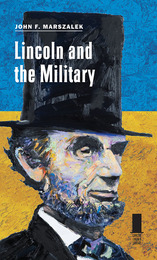 When Abraham Lincoln was elected president of the United States in 1860, he came into office with practically no experience in military strategy and tactics. Consequently, at the start of the Civil War, he depended on leading military men to teach him how to manage warfare. As the war continued and Lincoln matured as a military leader, however, he no longer relied on the advice of others and became the major military mind of the war. In this brief overview of Lincoln’s military actions and relationships during the war, John F. Marszalek traces the sixteenth president’s evolution from a nonmilitary politician into the commander in chief who won the Civil War, demonstrating why Lincoln remains America’s greatest military president.

As tensions erupted into conflict in 1861, Lincoln turned to his generals, including Winfield Scott, George B. McClellan, and Henry W. Halleck, for guidance in running the war. These men were products of the traditional philosophy of war, which taught that armies alone wage war and the way to win was to maneuver masses of forces against fractions of the enemy at the key point in the strategic area. As Marszalek shows, Lincoln listened at first, and made mistakes along the way, but he increasingly came to realize that these military men should no longer direct him. He developed a different philosophy of war, one that advocated attacks on all parts of the enemy line and war between not just armies but also societies. Warfare had changed, and now the generals had to learn from their commander in chief. It was only when Ulysses S. Grant became commanding general, Marszalek explains, that Lincoln had a leader who agreed with his approach to war. Implementation of this new philosophy, he shows, won the war for the Union forces.

Tying the necessity of emancipation to preservation of the Union, Marszalek considers the many presidential matters Lincoln had to face in order to manage the war effectively and demonstrates how Lincoln’s determination, humility, sense of humor, analytical ability, and knack for quickly learning important information proved instrumental in his military success. Based primarily on Lincoln’s own words, this succinct volume offers an easily-accessible window into a critical period in the life of Abraham Lincoln and the history of the nation.

TABLE OF CONTENTS
Cover
Jacket flaps
Title Page
Copyright
Contents
Preface
1. “No Commander Ever Started with a Heavier Handicap”
2. “Why Don’t They Come!”
3. “The Integrity of the Union [Is] Prominent”
4.“Without Slavery the Rebellion Could Never Have Existed”
5. “It Is the Old Difficulty”
Gallery of Illustrations
6. “He Is Managing the War”
7. “He Has the Grit of a Bulldog!”
8. “A Victory Worth More . . . Than a Battle Won”
9. “He will Stand in History beside Washington, Perhaps Higher”
Conclusion
Notes
Index
Author Biography
Other Books in the Concise Lincoln Library
Back Cover