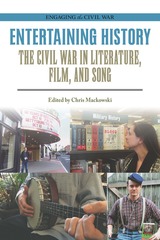 Popular media can spark the national consciousness in a way that captures people’s attention, interests them in history, and inspires them to visit battlefields, museums, and historic sites. This lively collection of essays and feature stories celebrates the novels, popular histories, magazines, movies, television shows, photography, and songs that have enticed Americans to learn more about our most dramatic historical era.

From Ulysses S. Grant’s Memoirs to Abraham Lincoln: Vampire Hunter, from Roots to Ken Burns’s The Civil War, from “Dixie” to “Ashokan Farewell,” and from Civil War photography to the Gettysburg Cyclorama, trendy and well-loved depictions of the Civil War are the subjects of twenty contributors who tell how they and the general public have been influenced by them. Sarah Kay Bierle examines the eternal appeal of Gone with the Wind and asks how it is that a protagonist who so opposed the war has become such a figurehead for it. H. R. Gordon talks with New York Times–bestselling novelist Jeff Shaara to discuss the power of storytelling. Paul Ashdown explores ColdMountain’s value as a portrait of the war as national upheaval, and Kevin Pawlak traces a shift in cinema’s depiction of slavery epitomized by 12 Years a Slave. Tony Horwitz revisits his iconic Confederates in the Attic twenty years later.

The contributors’ fresh analysis articulates a shared passion for history’s representation in the popular media. The variety of voices and topics in this collection coalesces into a fascinating discussion of some of the most popular texts in the genres. In keeping with the innovative nature of this series, web-exclusive material extends the conversation beyond the book.

AUTHOR BIOGRAPHY
Chris Mackowski is the editor in chief of Emerging Civil War and a coeditor of the Engaging the Civil War series. The historian-in-residence at Stevenson Ridge, a historic property on the Spotsylvania battlefield, and the author of more than a dozen books, he is a writing in St. Bonaventure University’s Jandoli School of Communication, where he also serves as associate dean of undergraduate programs.
TABLE OF CONTENTS

Part One. The War of Words: The Civil War in Literature
1. Ambrose Bierce and Stephen Crane: A “First Look” at the Civil War through Fiction by Amelia Ann and Chris Mackowski
2. Interpreting the Man: General Ulysses S. Grant and His Personal Memoirs by Nick Sacco
3. Glory Road: Bruce Catton’s Army of the Potomac Series by Meg Groeling
4. From the Pages to the Park: The Influence of Popular Literature on Andersonville National Historic Site by Chris Barr
5. History Meets Art Meets Television: Shelby Foote and The Civil War by Chris Mackowski
6. “Rejoice. The Civil War Series for All Time”: Remembering Those Silver Books from Time-Life by Meg Groeling
7. James McPherson’s Battle Cry by Ryan Longfellow
8. There’s More to Groom Than Gump: The Civil War Writings of Winston Groom by Richard G. Frederick
9. A Conversation with Jeff Shaara by H. R. Gordon
10. Cold Mountain and the Itch of Interest by Paul Ashdown
11. Revisiting Confederates in the Attic: An Interview with Tony Horwitz by  H. R. Gordon
12. The Civil War Periodically by Mary Koik

Part Two. Seeing Is Believing: The Civil War on Film
13. The War Laid in Our Dooryards: Civil War Photography by Kevin Pawlak
14. The Gettysburg Cyclorama: Entertainment of the Past, Present, and Future by Chris Brenneman
15. Marching against Dixie: The Creation of Gone with the Wind as an American Icon by Sarah Kay Bierle
16. “The Elephant in the Room”: Slavery in Cinema from Gone with the Wind to 12 Years a Slave by Kevin Pawlak
17. The Civil War in Prime Time: The TV Miniseries Roots, The Blue and the Gray, and North and South by Andrew Brumbaugh
18. The Civil War Trifecta: How Three Films Shaped Our Perceptions of America’s Bloodiest Conflict by Jared Frederick
19. One Giant, Forgotten Leap: The Life, Death, and Resurrection of the H. L. Hunley by Brian Hicks
20. Abraham Lincoln: Freedom Fighter, Vampire Hunter, and Zombie Killer by Ashley Webb

Part Three. For Your Listening Pleasure: The Civil War in Song
21. “Dixie” by Dan Welch
22. “The Battle Hymn of the Republic”: Origins, Influence, Legacies by John Stauffer
23. Bobby Horton and Sam Watkins: All along “The Kennesaw Line” by Chris Mackowski
24. Not from This Century: A Longing Melody from a Modern Time—“Ashokan Farewell” by Dan Welch
25. The Civil War: American Epoch, Nashville Album, and Broadway Musical by Rebecca S. Campana Conclusion by Chris Mackowski