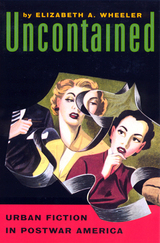 In the postwar era, American urban fiction is dominated by the imagery of containment. Across the fictional landscape, the city is divided into segregated zones, marked by the threat of inevitable violence, and set off from the safety of equally contained suburbs. Mean and dangerous, the city can only be navigated by a solitary expert, alienated and male. In Uncontained, Elizabeth A. Wheeler offers a critique of this familiar story-evident in the noir. narratives of James M. Cain and in work by Ellison, Roth, Salinger, Percy, Capote, and others —and challenges its link to the postwar city.

Discussing film, short stories, and novels from a cross-section of American cities, Wheeler integrates these stories of containment into a shared pattern and reads them across a broad spectrum of famous and forgotten works by men and women of various ethnic and literary traditions to reveal a larger vision of postwar America. Knowing that containment is never the entire story, that diversity or trauma always shows itself, she shows how the uncontained has shaped the historical moment. Aware that liberating counterstories do get told, she places them in dialogue with those of the alienated man, the war veteran, Beat hipster, noir detective, and ironic suburbanite — in historical context — and revives the idea of urban space as a place of openness, thereby challenging a literary containment of racial difference, gender, and sexuality. By reading Paule Marshall in tandem with Philip Roth, Wheeler explores the relationships between adjacent neighborhoods and reconnects separate literary and geographic areas. By bringing Ann Bannon's lesbian pulp fiction, Hubert Selby's cult novels, or the work of John Okada, Hisaye Yamamoto, Chester Himes, Gwendolyn Brooks's, Jo Sinclair, and many others to bear on more canonical texts, she offers a more complete understanding of this period of American fiction — one that points toward a city that is open and inclusive.

Uncontained suggests that while decline, division, and decay form a major part of the story of mid-century urban America, the postwar city also represents much of what is best about American life. Rather than reproducing the containment of culture, Wheeler places together the wildly disparate to show how we move beyond containment.

AUTHOR BIOGRAPHY
Elizabeth A. Wheeler is an assistant professor of English at the University of Oregon, Eugene.